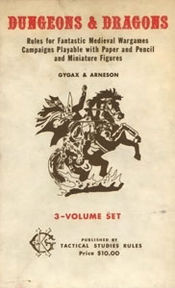 Last week, I sat down with my 11 year old son to watch Wizards’ keynote address at Gencon. (We had just finished watching an episode of Doctor Who; clearly I am raising this one right!) My three main take-aways from the presentation were a 2014 release for D&D Next, an impressive focus on the Forgotten Realms, and the digital release of the back catalog next year. A longer development cycle for D&D Next is certainly good news, though I am less thrilled by the Realms stuff, never being a huge fan. I was simply ecstatic by the announcement that older D&D products will become available for download digitally soon.

Though many of the details are unclear at this point, my mind is reeling with thoughts of what might become available. I realize that the releases will inevitably be a slow, steady stream, and also that it’s unlikely that everything I want will become available. Still, there are at least ten items that I would download immediately upon release.

There could be no better place to start than at the beginning. The original set of three booklets from 1974 set the tone for everything that would follow, and indeed, altered the landscape of gaming in general forever. As a fan of the history of Dungeons & Dragons, how could I leave this off my list? 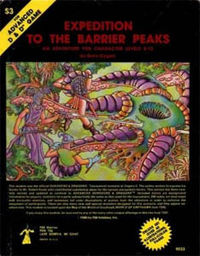 Expedition to the Barrier Peaks

I’ve always been fascinated by this one, though I never read it or even saw a copy that I can remember. All that I know about it has come from online research, and it quite simply looks amazing. The genre-shifting environment is absolutely brilliant, and though some may call it corny or outlandish, I personally think a little bid of oddness and humor should be sprinkled through even the most serious campaign. Do they make a froghemoth miniature, because a 4E conversion could be really fun!

Purely a nostalgia pick. There are many other tomes full of monsters out there, but I have a very clear personal memory attached to this one. I was sixteen years old, a newly licensed driver, and my mother sent me to the butcher shop just up the road. Afterwards, with a bag of bologna and corned beef in hand, I took a quick detour into a used bookstore a couple doors down. A small section of RPG material included the Fiend Folio. Its fantastic cover and quirky selection of creatures impressed me, so I picked it up with the change from the butcher. I probably got into some trouble with my mom, but the Fiend Folio was so fun it didn’t matter too much.

Isle of the Ape

I am a min-maxer at heart, and thus this high-level adventure based on King Kong is a favorite. The adventure is a deadly challenge, but it was even more lethal when a friend offered to run it for my group. By the end of the night, the DM was clearly cheating to kill us. Worst example: knowing a room full of kobolds (don’t ask) were just beyond a door, the thief opened it, while the mage let loose a prismatic spray. “Well, all the kobolds were laying down on the floor, so your spray misses them. 120 of them stand up and hurl poison spears at you.” I learned much about DMing that night. 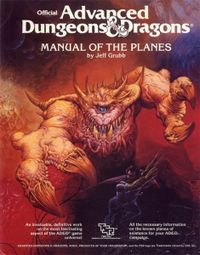 Manual of the Planes

One of my favorite books to just flipping through during my 2E days. The cover is gorgeous, and the sheer imagination on display inside makes it something truly special. While I appreciate 4E’s changes to the cosmology, particularly in making the planes more accessible at lower levels, there’s something to be said about the challenge of simply surviving in the planes as written in this book.

The Grand Duchy of Karameikos

The Gazetteer series is among my favorite D&D books of all time, and this was the one I used the most in my D&D Basic campaign. The world truly seemed alive, with so many allies and villains for my players to meet. It was an ideal setting for me as a beginning DM. Other favorites from the line include the Orcs of Thar (with the sweet Orc Wars game inside), the Shadow Elves, and the dwarf, elf, and halfling based offerings, which included new character classes for these races.

This may seem like a very strange choice. The book was filled with forms and such that could be used to plan an adventure or even a full campaign. It’s unlikely the forms would be properly digitized, but still, the book would be useful. I learned quite a lot from it, in the days before there were dozens of DM advice websites available with the click of a mouse. 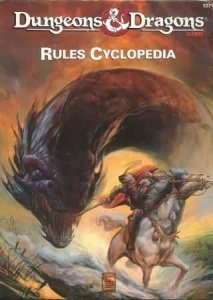 Basic D&D is what I cut my teeth on, and will always have a special place in my heart. The Rules Cyclopedia combined all of the rules from the Basic, Expert, Companion, and Master’s boxed sets into one hefty hardcover tome. Of all the D&D stuff I’ve sold or lost over the years, this book is the one I miss the most.

The looseleaf Monstrous Compendium releases were brilliant. You could mix and match the different versions depending on which setting you used, keeping all your monsters together for inspiration. It would have been best if each monster had a full front and back, for DMs who were picky about alphabetization, but I really liked the customization options. Wouldn’t mixing and matching digitally be a great solution? The first Ravenloft MC was particularly appealing to me because of the inclusion of monsters inspired by classic horror films.

The Dragonlance saga, the Chronicles in particular, was my bread and butter for many years. To me, it will always be the definitive fantasy setting. My kids have enjoyed the books, as well, and I would love to run a campaign using the original modules with them some day. Yeah, it’s railroading, but when the view outside the window is this nice, I don’t think the players will mind too much.

Of all the items on the list, my guess is that the original boxed set and Barrier Peaks are the guaranteed to be reprinted, with the Manual of the Planes and the Fiend Folio a tad less likely. Everything else is a more unreliable, with the DM Design Kit having the smallest chance. In any case, the next year should be one of the best for fans of classic D&D, and I look forward to it very much.