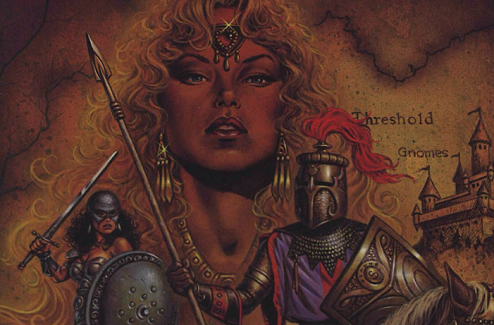 It’s a quiet time for the D&D fan. 4th Edition is done, but the new version of the game (whatever it might be called) is months away. Coupled with this lull in activity is a sense of nostalgia due to the 40th anniversary. These two factors have caused me to turn my eye to the digital offerings at D&D Classics. Having the chance to purchase a few titles from the glory days of my youth is certainly worth a few bucks. Today, I am taking a look back at GAZ1 The Grand Duchy of Karameikos, a book I absolutely loved when it was released. Does this first Gazetteer hold up to the modern eye?

The first thing that struck me about reading through GAZ1 after all these years was the sheer amount of text. There are extensive sections without any illustrations, charts, maps, or anything of the sort. The first 25 pages are walls of three column text. It’s a lot to get through, in all honesty. The Player’s Background takes readers on a brief tour of the map of Karameikos before launching an interesting section for character creation. Players roll dice to randomly determine social standing, ancestry, and their home town. There are even special charts for the three demihuman races Basic D&D supports. 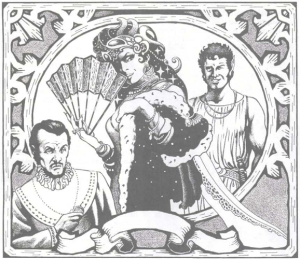 Rules for skills are also included in this section. At the time, I thought skills were a fantastic addition to the game, and never played without them. While I appreciate the inclusion, which added some depth to Basic, the three page rules here don’t really go into the depth that such a system requires. There is lots of room for interpretation, a bit more than what I am used to after the much stricter skill system in 4th Edition.

The overwhelming majority of GAZ1 is devoted to fluff, with a vast array of details giving background information to your campaign. A timeline of the region’s history is very helpful. A section devoted to politics includes an interesting sample story hook. One of the largest portions of the book details Karameikan society. And I mean, DETAILS, including social ranks, religion, military forces, the legal system, even fashion trends and a calendar. There is almost as much text describing Karameikan dress as there was about the skill system earlier in the book. The economy and major geographic regions, as well as information about communities scattered through the land, are also detailed. The end result is a very well thought out and highly realistic setting.

The largest section of the book is devoted to NPCs. There are dozens of characters in this listing, from the Duke himself all the way to suggested big bad evil guy, Baron Ludwig von Hendricks. For each person, paragraphs about history, personality, appearance, DMing notes, and game statistics are provided. There is a tremendous wealth of useful information here, and it would be easy to find an NPC for almost any need in your campaign.

GAZ1 closes with more crunchy elements. A list of suggested monsters is supplemented by two new creatures, the chevall (horse/centaur shapeshifter) and the nosferatu (variant vampire). A few final, very helpful pages with DM advice round out the book. I particularly liked the short adventure starters, arrayed in a nice progression from Basic to Master level. This is the sort of thing I craved when I was younger. Often, getting a good hook was the hardest part of making a new adventure.

So, does The Grandy Duchy of Karameikos hold up more than two decades later? For the most part, yes. The sheer amount of edition-free fluff makes it a good read no matter what game system you are using. But it really doesn’t do much as a supplement for Basic D&D. Later entries in the GAZ series would tend towards more crunch, but this first release is disappointing if you are looking for rules-heavy content. It is interesting from a historical perspective, and would be a solid campaign setting for any edition, even 4E or Next. But there’s not a lot of new ground broken here; Karameikos is the very definition of generic medieval fantasy, albeit one that is well designed. It’s certainly not nearly as unique as Dark Sun or Spelljammer. Unless you have a strong nostalgia for GAZ1, I’d suggest waiting to spend your digital dollars for more unique Gazetteers to come in the future.